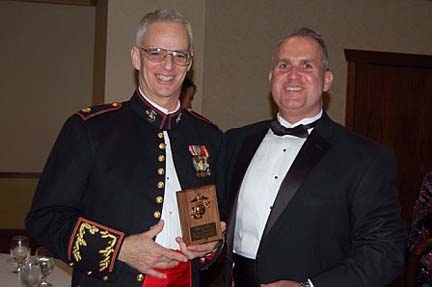 Louisville, Kentucky, April 5, 2008: Presented annually at the Officer Selection Officer (OSO) Colonel William “Rich” Higgins Memorial Mess Night/Dining-In to an individual selected by the Marine Corps Coordinating Council of Kentucky (MCCCK) Board of Directors, who has demonstrated exemplary community leadership and commitment, with a long history of dedicated service to Marine Corps related activities within the Commonwealth of Kentucky.

For almost 44 years, Major Allen D. Broussard, USMC (Ret) has steadfastly served his nation as a career Marine, military educator, and leader of veterans. Having enlisted in the Marine Corps in 1964 and serving in multiple capacities as a non-commissioned officer at Marine Barracks, London, England; Camp Pendleton, California; and the Republic of South Vietnam, where he saw combat action near the Demilitarized Zone during the Tet Offensive of 1968, he was selected for the Enlisted Commissioning Program and subsequently attended Officer Candidate School and the Basic School at Quantico, Virginia. Upon commissioning in 1973, he served in a wide variety of assignments ranging from platoon commander and executive officer of an infantry rifle company to commander of a provisional unit charged with the emergency evacuation of personnel from the American Embassy in Saigon during April 1975, as the North Vietnamese Army closed in on the city and the long bloody Vietnam War came to a climatic end.

Following post war tours at various Marine Barracks within the United Sates, and additional schooling, both civilian and military, he was posted to Louisville, Kentucky as a recruiter. Promoted to major in 1982, he served both as executive officer and then later as commanding officer of the Marine Corps Recruiting Station Louisville. Upon his retirement in 1985 at Louisville, Kentucky, he served as a Marine Instructor at Fern Creek Traditional High School for nearly 19 years, during which time he influenced the lives of numerous young men and women, many of whom went on to serve their nation as graduates of prestigious United Sates military service academies. His JROTC cadets amassed in excess of three million dollars in scholarship money during his tenure at Fern Creek Traditional High School, while garnering nine national championships in close order drill under his leadership.

Volunteerism has always played an important role in his life and he has never shirked from the opportunity to help others. During his career and throughout his retirement, he has provided needed counsel to numerous young men and women seeking scholarships and occupational direction. His service to Louisville area veterans’ causes is legendary. As a long time friend of Rodney Williams, Jr., in whose memory this award has been instituted, he served with him on the USS Higgins Commissioning Committee and the Patriots Peace Memorial Committee, the latter of which he chaired through the critical years of design, construction and financing. Through his leadership, the Patriots Peace Memorial stands today on the banks of the Ohio River in testament to the honorable service of military personnel, who have lost their lives in the line of duty, but not as a result of hostile enemy actions. Through his dedication to this cause, the Louisville, Kentucky community has the unique and possibly single honor of being host to the only memorial of its kind in our nation – one which recognizes the inherent danger and sometimes fatal consequences of military training and service in our armed forces.

Active in veterans’ organizations, such as the American Legion, Military Order of World Wars, and the Marine Corps League, he has provided profound comfort to families of not only deceased veterans, but also active duty Marines killed in action, as the leader of a burial honors detail. When death summons former Marines of past wars home, it is he who sounds the call for rifle volleys and taps, as they are laid to their rest and when our Marine Corps brothers and sisters pass from this life with no family or resources for a proper burial, it is he who rallies the troops on their behalf to do whatever is necessary to ensure that dignity and compassion abound.